Videos › Raising Our Daughters to Speak Up

Want to be the first to hear about new videos?

These are some of the names we grew up being called:

Girls who raise their voices, who ask for what they need, and who say how they feel risk being ostracized by peers and adults alike.

It’s a confusing time to be a girl: on the one hand, we may have opened every door for girls—yet we still expect them to creep through sweetly, and silently. If they don’t, we police them with labels like “bossy.” 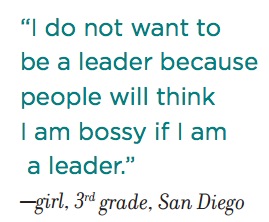 In 2008, the Girl Scout Research Institute found that one-third of surveyed girls who did not want to be leaders said they feared being laughed at, making people mad at them, coming across as bossy, or not being liked by people. (PDF)

It is a problem that only intensifies in adulthood. As Sheryl Sandberg and Adam Grant have observed,

“When a woman speaks in a professional setting, she walks a tightrope. Either she’s barely heard or she’s judged as too aggressive.”

Women have unfortunately adapted: studies find that female professionals, even those working at the most senior levels, speak less in meetings as an act of self-preservation.

So how do we protect girls from a culture uncomfortable with their voices, yet still raise our daughters to advocate for themselves? Telling them to pipe down isn’t an option: it’s not enough for girls to simply have strong opinions. They have to know how to express them, so they can pursue their dreams, achieve their potential, and change their world for the better. 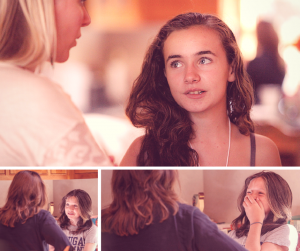 Consider some of these strategies:

Girls’ voices are non-negotiable. When we create homes that nurtures them, and give our families the tools to critique a silencing culture, we get closer to the day when the word “bossy” is obsolete.

Express Yourself by Emily Roberts.

These videos are made possible through the support of our viewers.