What percentage of the time when girls say they’re “just kidding,” do you think they’re really just kidding?

We’ve been asking girls that question for a long time. The numbers they come up with are often low. Really low. Why?

Many girls use the phrase “just kidding” (along with its cousin, “no offense” – as in, “No offense, but could you go away?”) to say something unkind (or painfully honest) without having to apologize for it. Using jokes to hurt someone is known as indirect aggression, defined as seemingly unintentional aggression.

Are girls more likely to use humor to hurt? We don’t know. But we do know that girls are under unique pressure from our culture to please others, especially their friends. These gender norms, which tell girls early on what it means to be a “normal girl,” tell girls to worry more about being liked than saying what they really think. As a result, many girls repress their strongest thoughts and feelings as they approach adolescence. 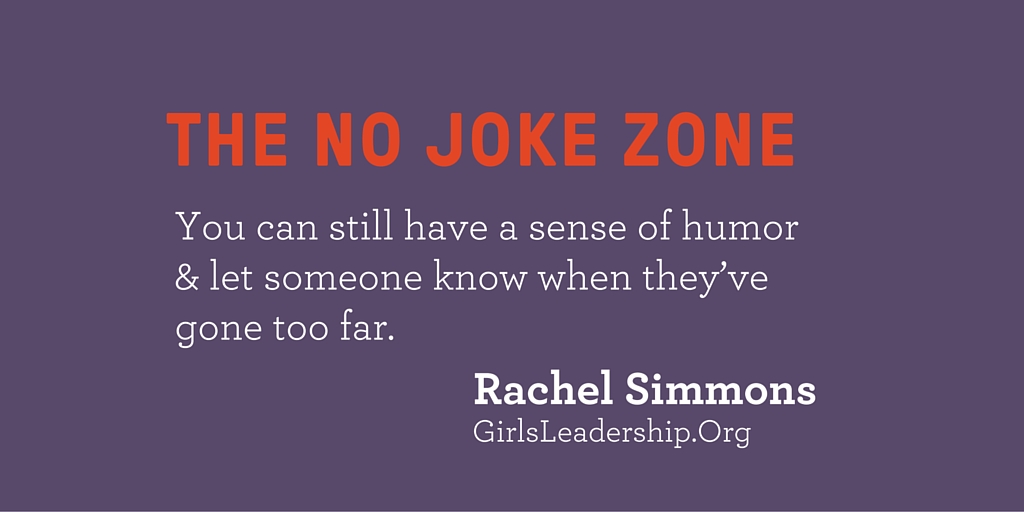 A mean joke let girls reconcile these competing pressures: it allows girls both to express their feelings and comply with the pressure they feel to be liked and avoid conflict.

At first glance, a mean joke might seem like a helpful adaptation that let girls have it both ways. But there are a host of reasons why indirect aggression is problematic.

For example, I might ridicule a friend’s grade on a test, but if I follow it up with “just kidding,” Unwritten Rule #1 is that she has to laugh along with me. If she refuses and tries to call me out, Unwritten Rule #2 is that I get to say something like, “C’mon, I was just kidding – chill out!”

If she still refuses, Unwritten Rule #3 says I’m allowed to say she’s too sensitive, and maybe even lock her out of the group for a while after that.

What this means is that girl who was targeted feels silenced. Unwritten rule #4 is that she stays quiet and doesn’t speak up on her own behalf. Unwritten rule #5 is that no one else does, either.

The girls enforcing the joke are disrespecting the target’s emotions, which is a powerful form of disrespect. When you pressure someone not to feel hurt, you are basically saying, I don’t care if you feel hurt by this. I think it’s funny, so you have to think it’s funny, too. When we don’t challenge this behavior in girls, we let them think it’s okay to do it.

The Threat to Girls’ Integrity.

Using jokes as a way to hurt someone is also a threat to girls’ integrity. Too often these jokes contain kernels of truth, words that girls want to express but feel too nervous to say in a more serious tone. When girls lean too heavily on the crutch of a joke to make a point, they learn a troubling habit that allows them to avoid being direct. They don’t get to practice flexing the muscle of assertive communication. Painful as it can be, saying what you really think is also how girls stay true to themselves in the face of pressure to repress who they really are.

In this video, we introduce one of our favorite tools to help your family draw the line on offensive jokes. If any family members seem skeptical – especially grown-ups who think jokes are important – keep these big picture concepts in mind:

When girls feel permission to say no, and see others honor their request, they begin to expect this level of respect from others. They enjoy a level of realness in their relationships, growing more confident in what they want from their friends and peers in the process.

on Parenting     by Rachel Simmons

These videos are made possible through the support of our viewers.