Resources › Blog › The New Book Your Daughter Needs You to Read

When bestselling author Peggy Orenstein has something to say about girls, we listen. From inequality in the classroom to princess obsession and beyond, Peggy has devoted her life to shining a light on the most critical issues facing girls and women.

Read on for an exclusive Q & A with Peggy, and to win a free copy of the book! (Book contest has ended)

This book is your roadmap to a world your daughter has already entered. It’s for parents, teachers, and girls. And it can’t be missed.

Peggy is funny, honest, brilliant and the mom of a daughter. Her bottom line is this: can girls achieve equality in the classroom or the boardroom if they don’t have it in the bedroom?

Co-founder Rachel Simmons asked Peggy about why Girls Leadership community should know about girls and sex.

Why do parents need to read this book, even if it makes them uncomfortable?

Because when we don’t educate them about sexualization, when we don’t talk to them frankly about the realities of sex (including balancing the responsibilities and joys) all they’re going to hear is the voice of the culture, and that will do the educating instead. Our daughters deserve sexual encounters that are consensual, respectful, reciprocal, safe and pleasurable. They deserve to be able to express their wishes, needs and limits with a partner and be heard. They deserve to understand their body as something that brings the joy, not just something that is there to be seen by others. That is not going to happen on its own. And in the end, rather than being scary or embarrassing, integrating conversations about sexuality into our relationships with our daughters—and our sons, by the way—is an opportunity to make those relationships closer, to show that we are unequivocally there for our daughters. 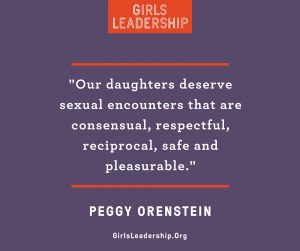 This book ends up being about so much more than sex. Why?

Because sex is a social justice issue, just the way who washes the dishes in the home is a social justice issue, as well as a personal issue that you navigate and accommodate the best you can in an imperfect world. So all the ideas that, for instance, Girls Leadership works with about assertiveness, finding your voice, being able to articulate what you want and being able to navigate conflict and be clear about your limits are true in sex, but they’re also true in any personal or professional relationship as well.

Sara McClelland at the University of Michigan talks about “intimate justice,” which is a phrase that really resonated with me. She urges us to ask, who is entitled to engage in a sexual encounter, who is entitled to enjoy it, who is the primary beneficiary of the encounter, how is “good enough” defined by each partner? Those are tough questions for adult women to grapple with, but especially important to think about with girls, because their early sexual experiences shouldn’t be something they have to get over.

What are the 3 most important things you want your own daughter, Daisy, to know — that you learned from writing this book?

Well, I’ve promised Daisy I won’t go into any specifics about her when talking about this book. So let me say this: at the end of the book I talk about sociologist Amy Schalet’s “ABCD” model for raising sexually healthy kids, which I think is pretty great.  A is for “Autonomous.” We want the to be able to understand desire and pleasure, to be able to assert sexual wishes and set limits, and to prepare responsibly for sexual encounters. And the best way to gain those skills is to move slowly, with awareness of your and your partner’s desire and comfort. Because when you think about it, who is really more sexually “experienced,” a teenager who has intercourse while drunk to divest herself of virginity, or the one who spends three hours kissing a partner, learning about erotic tension, mutual pleasure, intentionality? Honestly, if we only get that far, we’d be ahead of the game.

Still, there’s more. B is for building egalitarian, supportive relationships that value shared interest, respect, care, and trust. That doesn’t mean relationships are the only context in which to be sexually active, but whether a liaison lasts for ten minutes or ten year is should have those qualities, it should be entered into with care, respect, mutuality and trust. C is more about me—it’s about maintaining and nurturing connection with your child.

One thing that really struck me about comparisons between Americans and the Dutch, who speak more frankly and honestly with kids about sex, is that Schalet says Americans force their kids to mature by creating a rift with their parents. Girls, especially, are forced to play the “ good girl” at home, either lying or not mentioning what they are actually doing. Then they are someone else in the outside world. Dutch families expect the child to grow up and remain connected with the family and that means talking about everything including sex. That also allows them to assert what Schalet calls a “ soft control” over the kids in terms of communicating about values and safety in an on-going way. I’m not saying our children have to tell us every little thing, but it really made me think: do I want to force my child to lie to me or do I want to be on her tea, be one of her advisors, be one of her guides? And finally, D is for recognizing the diversity and range of sexual orientation, cultural beliefs, and development among their peers.

(Book Contest has ended) To win a free copy of the book, comment your answer to:

What’s the best relationship advice a parent or adult ever gave you?

3 winners were randomly picked from amongst commenters.

The average teenager is exposed to nearly 14,000 references to sex each year on television?

92% of the top songs on the Billboard charts are about sex.[i]

One in three girls aged 15-17 say they have performed oral sex on a partner to avoid having intercourse.[ii]

The average American has first intercourse at seventeen; by nineteen, three quarters of teens have had sex.[iii]

72% of both male and female college students “hook up” at least once by senior year, with the average number of partners being seven.[iv] Only a third of college hookups include intercourse.[v]

70% of young people aged 16-24 say they wish they had known more before their first sexual experiences, especially about relationships and the emotional side of sex.[vii]

This book will help you tell your daughter what she needs to know – before she finds out somewhere else.

[vi] “Do Alcohol and Marijuana Use Decrease the Probability of Condom Use for College Women?” The Journal of Sex Research, 2014.

by Rachel Simmons   on Parenting