Your daughter and her friend are sifting through photos on their cell phones from a birthday party they just attended. Your daughter’s friend points to one pic, laughing, and says, “You should post this on Insta!” Your daughter shakes her head “no,” and adds, “I already posted a party shot.” What’s the harm in posting a second photo from the same event, you wonder, but keep your lips clamped.

What you may not understand is that your daughter’s answer is an example of her following a specific set of social media rules, designed by her peers. A recent article from the New York Times explains that these often unspoken, yet largely understood, guidelines shape teens’ social media use more than any restrictions imposed by their parents. This is largely because these rules have less to do with overall usage, and more with how one curates their content. For example, most girls approve of bikini pictures on social media and see them as a form of body positivity–but only if the girl who posted was with her family in the picture. If she were with friends or alone, it would be looked down upon as a sad attempt to be overly sexy. On top of that, you never want to use your Instagram to brag about any aspect of your life, especially fun events. Like your daughter alluded to, one photo from a fun party is okay, but any more than that is seen as too much.

To an outsider, these rules may seem confusing and arbitrary. To your daughters’ generation, who grew up at the genesis of the smartphone and social media platforms, these are the guidelines that shape and maintain one of their most valuable pieces of communication and evolving identity. While these rules may seem superficial, the consequences for breaking them are not. By now, many of us are aware that too much social media usage causes anxiety and sadness among its users. But again, it’s more than just the amount of time spent that is causing hurt feelings. These rules are internal, maintained by your daughters’ peers, and one can be excluded for defying the understood guidelines. Girls are expected to maintain an online personality that’s friendly, fun, and carefree, but also sexy and unconcerned with appearances. Talk about immense pressure!

So what can you do?

First, share the article with your daughter and ask about her understanding of these “rules.” You don’t have to call a sit-down to go over it in-depth, but ask her if she’ll help explain them to you. Then, take it a step further and ask why these rules are important. Be sure to use a non-judgmental tone, with genuine curiosity. Even if these rules seem silly or even outlandish, they hold merit in her world, so keep that in mind. Maybe by having to explain them, she will understand that they might not be as important as she has been made to believe. You can even add a sympathetic, “Wow, it seems stressful to have to know all these rules that are confusing and not spelled out anywhere.”

Then, ask her to show you positive, uplifting uses of social media she’s seen. What does she love about them? Note: As the article mentions, a lot of girls say they find empowerment from bikini pictures, but show her some empowering social media that has nothing to do with appearance, such as the #LikeAGirl ads, or pics of teen girls from the women’s marches, or the Youtube video of “Scars to Your Beautiful” by Alessia Cara. (We have many good media examples on our MEDIAGIRLS Facebook and Twitter page you can use.) Talk about how she feels after she sees them, and how life would be different if girls used social media to share more social media that provides support and encouragement.

Try this: Ask your daughter whether she’d be willing to try using social media this week to share links to media she considers inspiring for girls. Tell her you’ll do the same on your social media, and that you can both compare notes on how it felt. It may feel weird at first, especially if you’re not used to doing this. We’ve recently challenged the teen girls on our Youth Advisory Board to post positive in this way on Instagram, and here’s what they had to say:

Annie S.: At first, I was a little hesitant about posting because I usually don’t speak up about… well, really anything on social media. I didn’t want to post anything that anyone would be critical of, but then I realized that it doesn’t matter what anyone else thinks, and that my social media is a way for me to put my ideas across. It made me happy to realize that I can take a stand on whatever I want, and even if people do criticize me, I shouldn’t let it bother me. In the end, it’s more likely that whatever I say will have a positive impact on others–not a negative impact on me.”

Shira M.: “It felt weird posting a motivational quote, and admittedly, at first. I don’t usually post anything too personal on my Instagram account; my pictures are usually limited to the usual landscapes, selfies, and ticket stubs. However, once the likes started pouring in, it actually felt really good. I was proud to have posted a sentiment that meant so much to me, and I was proud of how people responded to it. Speaking up for what you believe in doesn’t have to entail something as big as protesting or petitioning; it can be as simple as posting a quote that may inspire someone.”

If we want to start a movement where girls (and boys) use social media for good, we’re going to need more trailblazers! Every girl, including your daughter, can be a shero who helps reshape the culture. Just imagine how much healthier and happier girls would be if they did more posting positive, and less trying to decode their own perplexing social-media “playbook.” 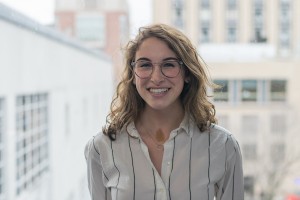