Resources › Blog › MEDIAMONDAYTIP: Are Our Girls Lying to Us about Their Self-Confidence?

“Okay, let’s talk about the ‘perfect girl’ according to media,” I said to the 10 middle-school girls in the MEDIAGIRLS class I piloted in 2014. The idea was to get girls thinking critically about messages they receive from media and how it ties to their self-worth. “How would you describe her?” Silence. I try again: “Think about the movies and music videos and ads you see,” I suggest. “What do the girls and young women look like? Who is the ‘perfect girl’ we see over and over?” 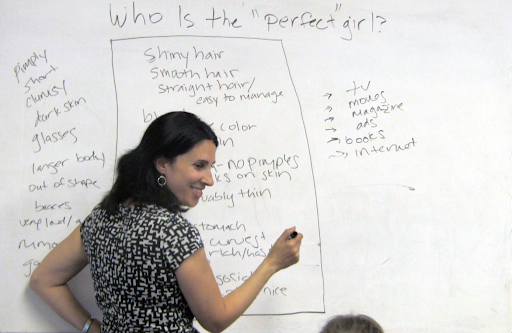 Eventually, one girl raises her hand. “Um…we are all perfect?” she practically whispers.

“Yes,” another 13-year-old chimes in, “We are all perfect in our own way. We are all beautiful.”

I stand there dumbfounded. What?! Do these girls somehow not notice that just about every girl and young woman portrayed in media is meeting near-impossible beauty standards and looks nothing like most of us?

“That’s true,” I respond, “But that is certainly not what media is telling us.” I pick up a dry-erase marker and walk to the whiteboard to write “Who is the ‘perfect’ girl’?” Underneath, I start a list: “skinny, shiny hair, big white teeth” and then I stand there and pretend to ponder it.

“No pimples,” one of the girls calls out.

“Long, glossy hair!” someone else shouts, getting into the spirit of it.

Suddenly they are unstoppable, and they fill the board with words that describe the impossible “right” look with which media hammers us. Since this first class in 2014, I’ve done this activity with thousands of girls who can rattle off the same two dozen adjectives for media’s “perfect girl.” But for those first few seconds, before they get on a roll, many stare at me until I throw out a sample word like “skinny.”

It took me a while to figure out why girls were hesitant to respond. They clearly knew the answers and were more than a little familiar with the pressure to get as close to this impossible beauty standard as possible.

Pre-teen and teen girls are also clear on what they are supposed to say about their appearance, what grownups have trained them to say: “Everyone is beautiful in their own way, including me.” Or, “what makes us beautiful is what’s on the inside.” We’ve drilled this into their minds. They now spew it back.

Here’s the problem: It goes against the messages they are consuming for 7 to 10 hours of media a day, according to The Representation Project, saying the opposite. Mostly, media tells girls that what matters most about them is how “hot” and thin they are. Basically, it negates everything we are trying to teach our girls. So who are they supposed to believe?

It seems media is winning: Between ages 8 and 14, girls’ confidence levels drop by 30%. (Ypulse Survey, 2018). In a recent survey of 1,000 teens polled, the majority of girls polled view physical attractiveness as the most common trait that our society values in girls. Seventy percent of girls ages 14 to 19 say they feel judged as a sexual object in their daily life at least once in a while (“The State of Gender Equality,” 2018).

So what can we do?

It should be noted that there are some pre-teen and teen girls who truly like their looks and do feel confident; it’s far from the majority though. When most girls tell us they feel confident and don’t care what media says, it’s not that they’re lying to us…it’s more about wishful thinking and, again, saying what they know we want to hear.

The best thing we can do is try to dig deeper with them. Have conversations regularly about media messaging and ask them to think critically about what they’re consuming:

How do you think that ad makes girls feel?

What do you think about the fact that so many celebrities are called “fat” when they’re bigger than a size four?

Why don’t we see Instagram influencers with dark skin and their natural hair?

We can talk candidly about how the media’s portrayal of women affects us if we’re not careful. “I was looking at a women’s magazine at the doctor’s office today and suddenly found myself worrying about my wrinkles. I hate that!” Or we might say something like, “I’ve come to really appreciate my curly hair even though Hollywood seems to love only straight hair.”

The important thing is to keep raising the issues, knowing we are for the most part competing with media. Practice these tips and strategies to keep this conversation alive and evolving. In the meantime, let’s all appreciate that girls truly want to believe that they are as beautiful as we know them to be. It’s our job to hold that space for them until they finally (hopefully) do.

This piece was originally published on MEDIAGIRLS.ORG as Help! My girl(s) is So Obsessed with Capturing Moments on Instagram, She Misses Experiences! and is republished with permission. Michelle Cove is the Executive Director of MEDIAGIRLS®, a nonprofit organization that teaches girls how to critique the way girls and women are portrayed in pop culture with an emphasis on creating empowering content.