Resources › Blog › Listen to Her: Girls Speak about VP Harris

Through prose, poetry, and art, our Girls Leadership Girl Advisory Board voices their thoughts on what it means to have Kamala Harris as Vice President.

Where to start? I am so so proud of VP Harris because watching her makes me feel like the world is widening for girls like me. Before Tiana, my favorite princess was Belle because she was the only person I thought I remotely could be like. Even though I was raised to believe that I could do anything, there were few examples of girls like me doing anything. Kamala Harris has been a name I’ve known for a while but because of her complicated history in the state of California and the amount of information I had access to, I didn’t know about how extensive her career had been.

I am proud of her because she has opened up doors for me. Black women are regularly relegated to the shadows despite the incredible work they do to keep this country going. Despite the many negative stereotypes about us in the movies, music, and on social media, black women have always gotten things done. VP Harris is evidence that black women can do the work and can do it well. She shows me that I should have pride in whatever I do, because I have the skills to do it, and if I don’t I can learn them. I look at her and I think, “she’s the kind of person I want by my side” and more importantly, “she looks like a person I can become.”

I would like to be a mathematician when I grow up. That field is notoriously empty of women and even more empty of women of color. I know it’ll be hard sometimes but Kamala Harris has taught me is that wherever I am in my life I should seek to learn as much as you can, greatness takes time, and I am working to make the way easier for girls like me. Her work as Vice President is something that I hope I can look back on and think, if she can do it, so can I. 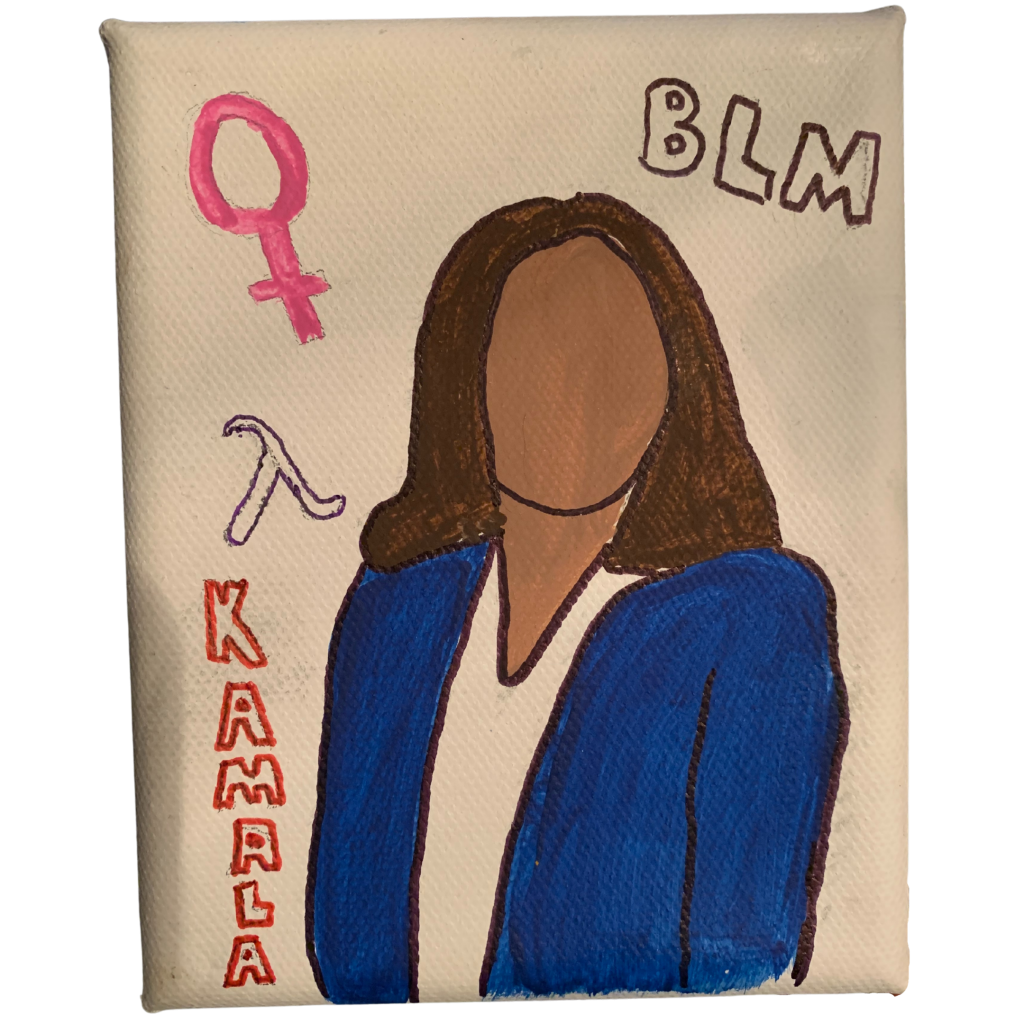 Kamala Harris becoming the first black female vice president of the United States is extremely empowering. It gives me faith and hope that women of color can do more than what people expect to be done. After a long stressful, disappointing and crazy year we’ve had, I feel like real change is coming, change that has been long past due. Change that will be from a women who understands us and able to relate to us, which is truely amazing. Kamala Harris has changed the way standards for America are. She’s shaped America in a new way and she isn’t even in office yet. From seeing this life changing history happen right before my eyes, it pushes, inspires me to work 10 times hard, to prove all the people who said change can’t happen wrong. All the kids of color growing up and seeing someone on tv that looks like them, showing them that the possibilities are endless.

(As a little introduction, I wrote this poem as a message to Kamala and I was trying to convey my cautiously optimistic outlook on the future of our country.)

to kamala-
we know you’re one individual
in a helplessly divided nation,
but we are incredibly hopeful
and wish you all the congratulations.

you’ve already begun making waves
and pushed through great challenges
to create the improvement we crave.
so thank you and good luck,
and on our behalf, make a change. 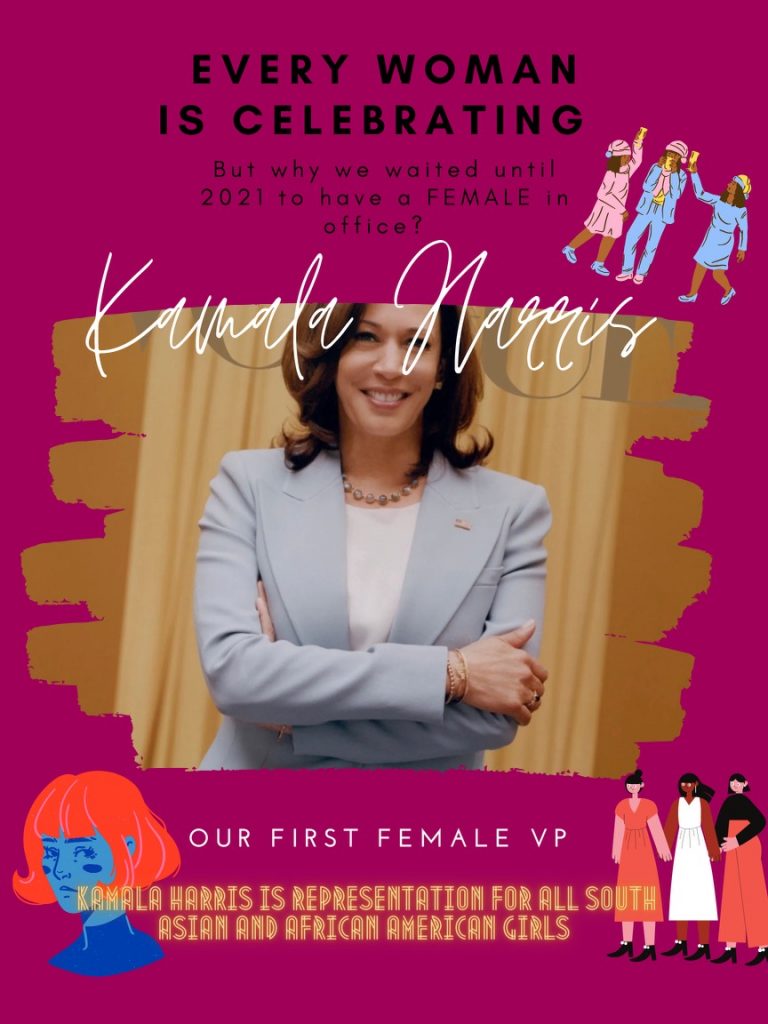 Society
Has your age ever put you in an uncomfortable position or held you back?
Everyone seems to think their opinion will hold back.
My age makes me too young or too old in situations.
Too young to know our political and governmental status is a war within itself?
Too young to know my culture is supposed to make me who I am?
Is the little girl in me not enough for you..
Let me fast forward to the mature girl in me.
Am I too old to know I deserve respect?
Too old to know my opinion matters in any given situation and shouldn’t be shut down?
Too old to know men and women are equal regardless of a societal structure?
I believe society deserves an apology.
Dear society, you can’t use me as a puppet for your systematic ways.
Dear society, thank you for pushing little girl like me down so we can rise up and defeat the odds
Dear Kamala, thank you for showing us that no matter what young female voices are needed
Dear Kamla, be the change this country deserves and empower for the future generations to come
Excuse me, Mr.President: It’s my turn and I’m speaking 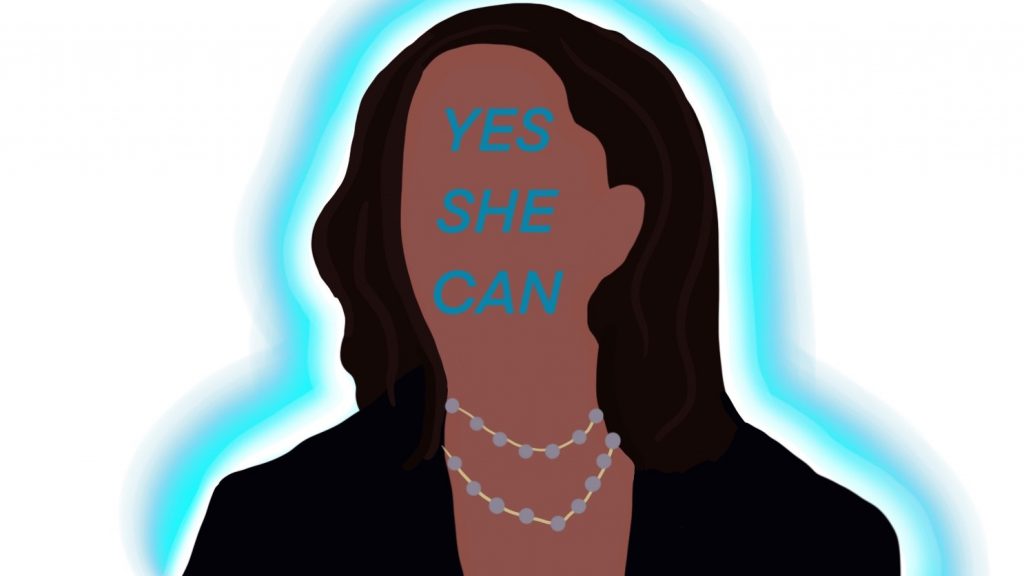 As a black girl, it means a lot to have a black woman in one of the highest positions of US government. However, part of me is very conflicted about what to think. I like her principles and goals, but the harm she has caused black communities and other marginalized groups isn’t something I can brush aside. I wish I could have full faith in her, but I cannot call myself a proud fan of hers, at least with what I know about her as of now. That being said, I do think her election is very significant. Who would’ve thought that a black woman would be able to occupy the office of Vice President, considering this country’s history and centuries of white supremacy. Of course this doesn’t mean that white supremacy has disappeared into thin air, but her election shows at least some progress in this country. Despite my reservations, I am very hopeful for the future, and think that this new administration will bring about at least some form of change. Regardless, having the Trump administration out of office is already a step in the right direction.

When I was younger, my parents bought my brother and me a book called Grace For President. It was about a young girl who ran for president at her elementary school after finding out that there had never been a female president in our country. One of the first things that she says in the book is when her teacher rolled out a large poster with pictures of all the presidents. The girl, Grace, then exclaims, “Where are the girls?”

I remember reading that book when I was in elementary school, around the time that Hillary Clinton was running for president. I remember feeling proud that we had a female candidate for president. I was only in fifth grade, but even then I understood the importance of her decision to run. I remember the sadness that I felt the day I found out she had lost the election. I didn’t understand what had gone wrong. After all, in the book, Grace does win the election and later declares that she will become president of the United States when she grows up. There were so many things that my mind could not comprehend – why didn’t our country let women step up and assume a role of leadership? Why were there so many prejudices and biases against women? Against minorities? Against people with different religions and cultures and beliefs? Our country stood for freedom, for opportunity, for change. Then why were so many people against us?

It wasn’t until this past summer that I opened Grace For President again. I was running an online summer camp for kids in kindergarten through third grade in my city with my Boy Scout troop, and I was making videos of myself reading books for them to watch. I read Grace For President to them around the time that Joe Biden announced he was choosing Kamala Harris as his running mate. My mom told me that day that she was probably the best choice he could have made for his vice president, and it wasn’t until he won the election that I realized she was right. Speaking as a fifteen-year-old, I know that Kamala is going to bring tremendous change to our country as vice president – change that our country has been in need of for so many years. I’ve always believed in the change that one person can bring to a community, to a city, to even a handful of people. 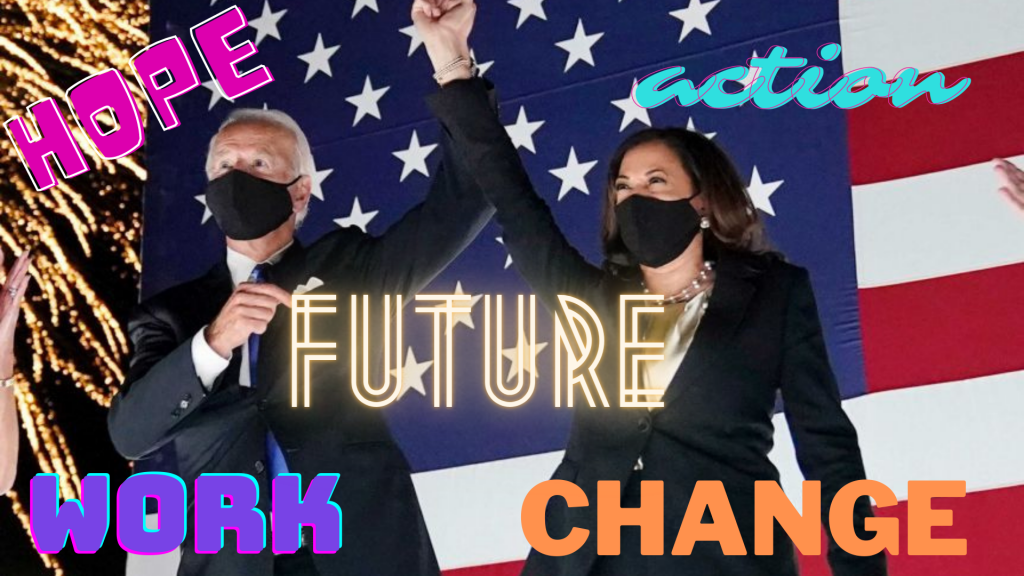