Resources › Blog › How Uncomfortable Are You Willing to Be?

Sometimes I think I’m the luckiest mom on earth.

My 14 year-old daughter still likes me. We don’t fight, she doesn’t talk back and we giggle all the time. When people meet her they tell me she seems so well adjusted and self-confident. I agree. In fact, I think she’s exceptional.

But of course I think that, she’s my daughter.

I’ve been asked, “How did you do it? What’s your secret?” While I’d like to take credit, I don’t think she’s incredible because of anything I did. It’s because of what I didn’t do. Kids have an innate knowledge of who they are, and without our influence they’ll express it if we sit back and watch.

As parents, we have a flawed belief system that our children are a reflection of us. We try to mold them into who we want them to be based on how we wish them to be perceived by the world, and more importantly, how we wish to be perceived ourselves. Sometimes we even ask them to limit or change their personal expression so that we won’t be judged. But, I have a theory.

I believe there may be a direct correlation between how uncomfortable we’re willing to be, and how much self-esteem our children develop as we’re raising them.

At a very young age, Maddie developed a special style. She knew at 2 years old that she had no interest in princesses, sparkles, rainbows, puffy sleeves or dresses. We shopped exclusively in the boys department.

By 3 years old, the only thing that distinguished her from little boys her age was her super cute bob haircut. Per her request, her hair kept getting shorter. By kindergarten there was no external evidence that she was a girl. She looked like a little boy, moved like a little boy and was fine with everyone mistaking her for one. When it started happening, I started watching for her reaction. She had none. She never corrected anyone. So, neither did I.

My mixed emotions were intense. I didn’t expect anyone to think she was a girl, but I was worried she would be bullied or diminished by other people. I was afraid that other people’s discomfort might eventually have an effect on how she felt about herself. So, I made the decision that at home, her self-expression would always be supported, no matter what.

When she was eight years old we had to go to a wedding. I knew I couldn’t ask her to wear a dress. Forcing her to wear something in order for me to feel more comfortable would have been the ultimate disrespect to her. So, she wore a suit and a tie.

Over and over I was asked, “I thought you had a daughter?” To which I responded, “I do. This is Maddie. Doesn’t she look fabulous?”

When you have a unique and special child, I think it’s our responsibility as parents to support their choice of personal expression without question. It’s not about us. Our kids shouldn’t experience judgment at home, because it’s certainly coming eventually from the outside world.

As parents, it’s our job to prepare them for that harshness by encouraging them to build a brilliant armor and a resiliency to the pending judgment of others. When we honor and support who they are, they become less penetrable to criticism and suffering at the hand of others. Honoring and supporting them sometimes means being incredibly uncomfortable and terribly afraid, but the rewards are immeasurable. 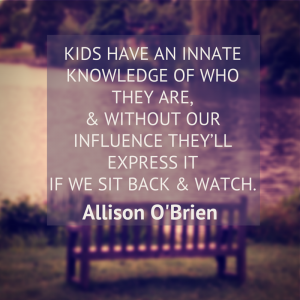 In fifth grade, without any prompting by anyone, Maddie decided to grow her hair out. Six months later she ditched the swim shirt for a bikini top. Then skinny jeans replaced cargo pants. Though she stuck to the skater tees and Vans, she was clearly a girl to anyone who didn’t know her.

Even with the changes she made on her own, I was really anxious about Middle School. I was terrified that she would finally be broken, given how cruel kids can be to each other. Once again, I had nothing to be afraid of. To this day, she doesn’t try to fit in, but she does belong. By merely being the true version of who she is, she’s gained an admiration and respect from her peers that repels the wickedness of middle school.

A self-assured teenage girl is such a rare thing it’s almost unheard of. I would love to be able to take full credit for how special she is. However, I don’t think I can claim that. I didn’t mold her. As terrifying as it was for me, I put my own fears and discomfort aside and I allowed her to take risks, be courageous, and open herself up, and it certainly paid off. I couldn’t be more proud of who she is or more inspired by who she’s becoming.

Allison O’Brien, born and raised in Kingston, Rhode Island, now lives in Lafayette, Colorado with her two children, a 14 year-old daughter and a nine year-old son. She is a Consultant and Facilitator with Listening Impact, a communication-consulting firm based in Boulder, CO.  She is passionate about helping others to cultivate meaningful connection through the power of Listening.

on Parenting     by Allison O’Brien