If I told you that on average, the lowest income Black girls have greater leadership skills and ambition compared to the highest income white girls, would you be surprised?

Girls Leadership found exactly that in its Ready to Lead report on what contributes to Black and Latinx girls’ confidence and leadership aspiration. Key factors included leadership identity in Black and Latinx parents, strong models and mentorship, and a definition of leadership that includes standing up for your beliefs and values. Our findings told the story of Black and Latinx excellence. We also shared findings from predominantly white teachers who assumed home culture and low income were barriers to leadership for girls of color. Neither of these assumptions is true.

When I shared these findings with predominantly white audiences, I was often met with gasps of disbelief, followed by questions about how we did our research. In the offices of Black and Latinx women, I was met with tears of recognition.

Faulty assumptions based on race are nothing new, but they continue to unfairly heighten the bar for girls of color. And there couldn’t be a more appropriate time to talk about Simone Biles. She has created a bar all her own, and she is redefining leadership in a way that reflects the values of a shifting demographic in the US where the majority of youth are youth of color. This redefinition reflects the research of Girls Leadership, yes, and can serve as an ongoing lesson for all of us. 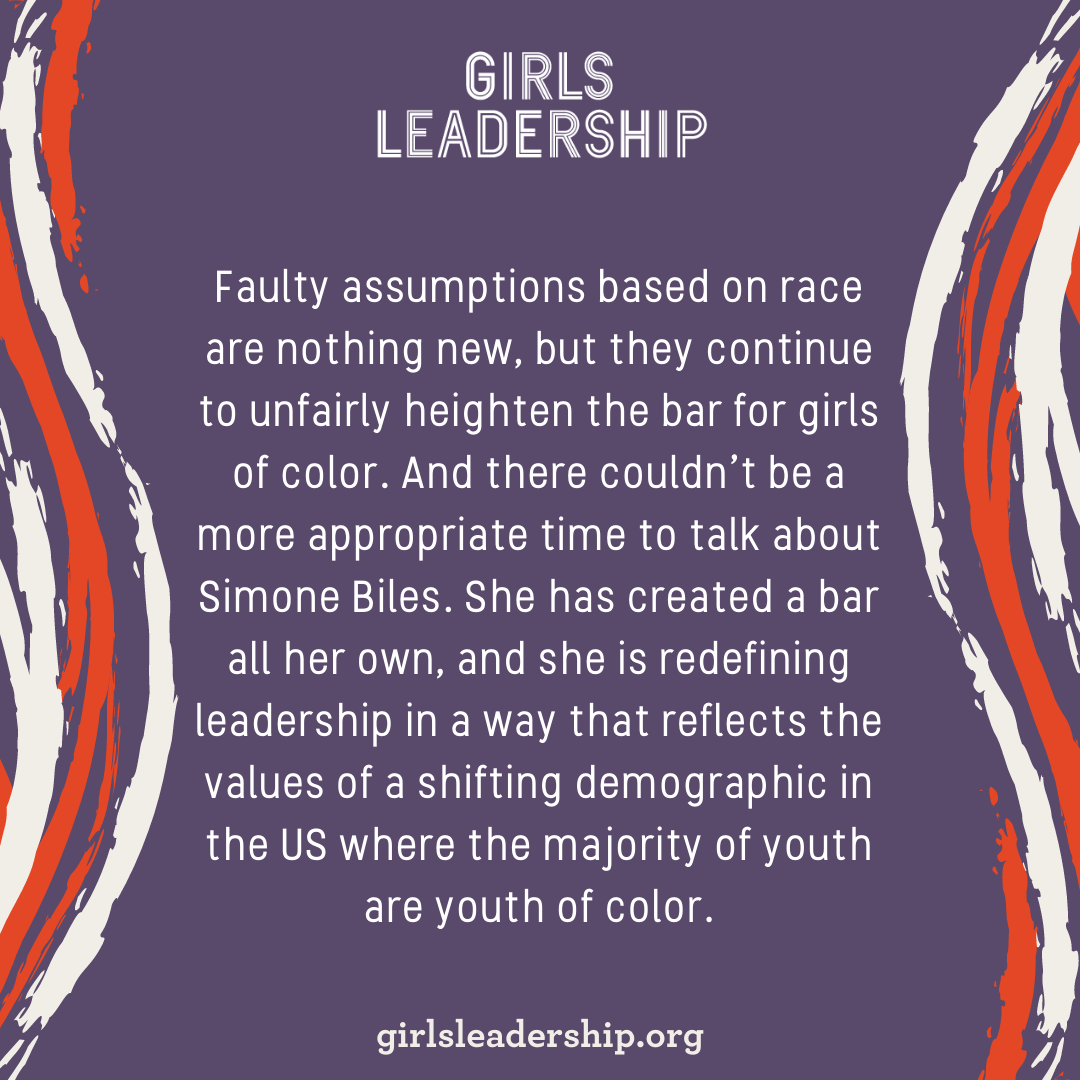 Biles’ physical excellence is, of course, remarkable and deserving of her GOAT (greatest of all time) moniker. It is easiest to look at her ability, and frame it in the story of her early challenges with years in foster care, and see her as an exceptional individual, existing in a different universe than us earthly folks, but that would be a missed opportunity to recognize the power and impact of her cultural heritage.

If we look at Biles’ success in the context of the cultures she was raised in, the crucial and interconnected factors in her exceptional success are undeniable: the support she has from her community, the joy she finds in her work, and the clarity that emerged from her rest. These are not values often celebrated in dominant (white) culture. 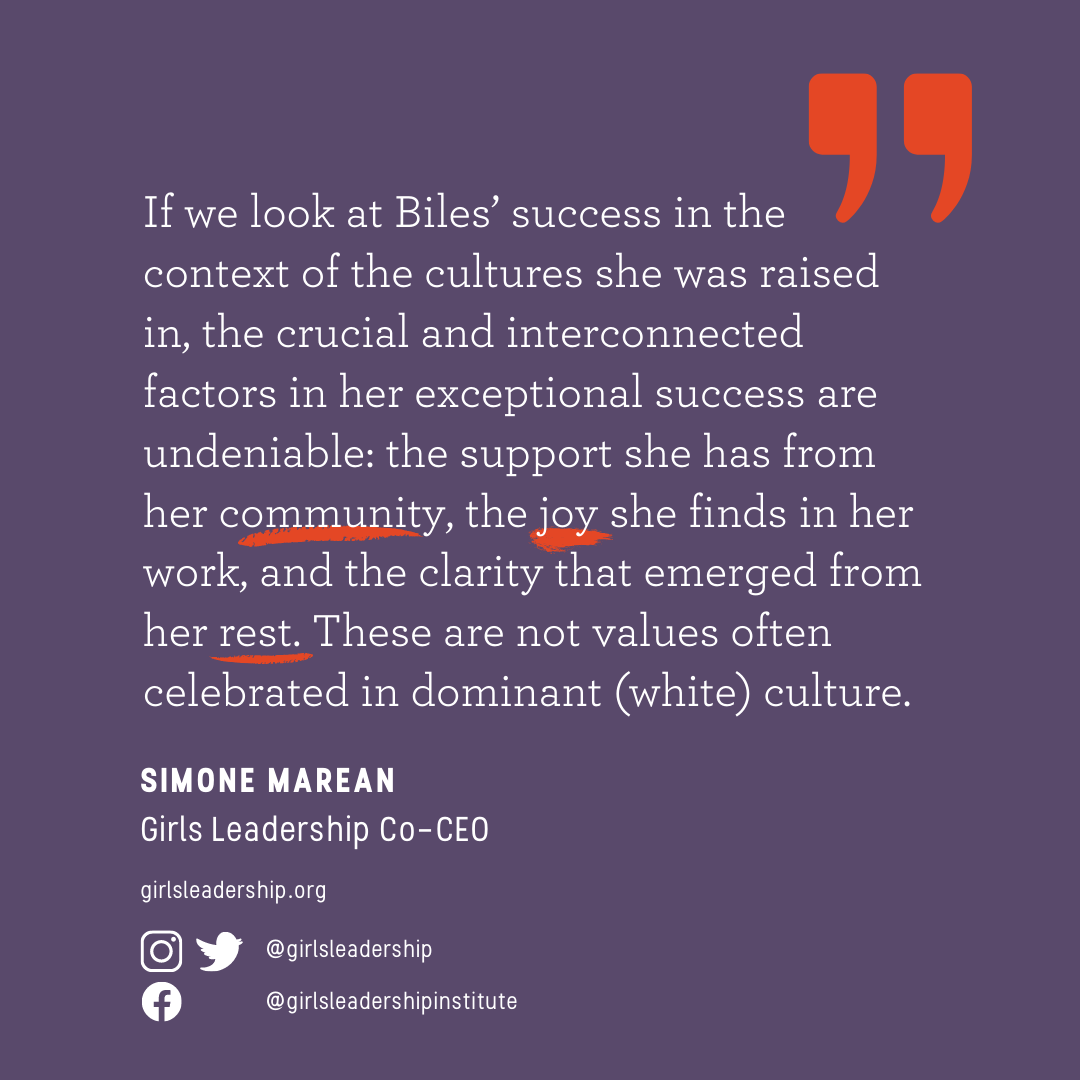 Let’s look at Biles’s community first. In her campaign videos with her new sponsor, Athleta, she shares her network with us and the tent is large, including her teammates, coaches, a best friend, her mom, sisters, and even her boyfriend. This is a new narrative of what makes a champion and a leader. It isn’t just hours of solitude in a gym, it is a network of collective support that is there for you on and off the mat. She took an individual corporate sponsorship and used it to shine a light on the power of community. And as Olympic teammate Jordan Chiles has made clear, Biles’ leadership also involves directly lifting others up.

This is an incredible opportunity for all of us caring for girls to take note—given that we are on the heels of more than a year of isolation, supporting teens through unprecedented levels of anxiety and depression—that even the highest achieving among us don’t get there alone. Any of us who’ve tried this approach know the cost.

And then there’s Biles’s joy. Girls Leadership’s co-CEO Takai Tyler notes that “Black Joy” is a form of resistance as old as oppression itself. Meaning, in the context of a white dominant culture that was designed to profit from the oppression of those in the non-dominant culture, living joyfully is resistance and a form of liberation. For Biles, joy isn’t a zero-sum game. Not only does it not need to be traded in for achievement; her greatest achievements, such as the Yurchenko double pike vault, exist right in the heart of joy itself.

Perhaps the most powerful practice that Simone Biles has exercised is the value of rest. In 2016 Biles took a break from gymnastics to rest and prioritize joy. It was from that place of rest that Biles was called back to gymnastics. In an interview with Hoda Kotb last April, Biles shared that she felt called by God to return to the sport to be a voice for change in the wake of the Larry Nassar sex abuse scandal. “If there [wasn’t] a remaining survivor in the sport, they would have just brushed it to the side, but since I’m still here…they have to do something. Gymnastics wasn’t the only [thing] I was supposed to do,” said Biles. From the clarity of rest, she felt called to lead change beyond gymnastics, for all girls. That purpose and power can’t come from burnout.

Simone Biles has repeatedly shown us that leadership—truly groundbreaking, impacting, culture changing leadership—is worth redefining. Now is the time for us to prioritize our communities, seek joy in all areas of our lives, and prioritize our collective rest and restoration. If we do this, we have a chance to truly honor the joyous power of Simone Biles, which would mean acknowledging and respecting the leadership and voice of all girls of color in the US—and the communities who inspired and nurtured their excellence despite overwhelming obstacles—even when they aren’t doing double backflips.

GET RESOURCES TO CULTIVATE VOICE, POWER, AND INFLUENCE IN YOUR INBOX.