Pop Quiz: Who does a teen girl turn to first when she’s feeling low on courage?

If you guessed friends, you’d be wrong. The answer was moms.

Surprised? So were we. In Girls Leadership’s first major study, “Dare to Dream, Dare to Act: What Girls Say About Bravery,” 77% of girls ages 13-17 said they turned to their moms for support and encouragement. Nearly half of them said they went to mom first. More than teachers, friends, and dads, girls told us mom was their role model.

That’s big news. Parents of teens are often told to expect a closed door in their faces when their daughter gets upset. The stereotypical teen, we’re told, is sullen, monosyllabic, buried in her phone, or rolling her eyes at a concerned parent. Parents just don’t understand, goes the prevailing wisdom, so expect a daughter to pull away in adolescence and turn to what one psychologist calls the “second family” of her peers.

For generations, psychologists have advised parents that the primary task of adolescence is to become an autonomous individual – essentially to prove that you can stand on your own. Resilience, now a white-hot buzzword in the parenting world, is almost always defined as coping with stress on your own.

But if there’s anything we’ve learned in over a decade of living with, teaching and studying girls, it’s that relationships fortify them. Strong, trusting connections, infuse girls with the courage to try new things, express themselves, and face down failure. Researchers who study girls agree; Wellesley’s Judith Jordan has shown that adolescents, especially girls, are most resilient when they connected with others. 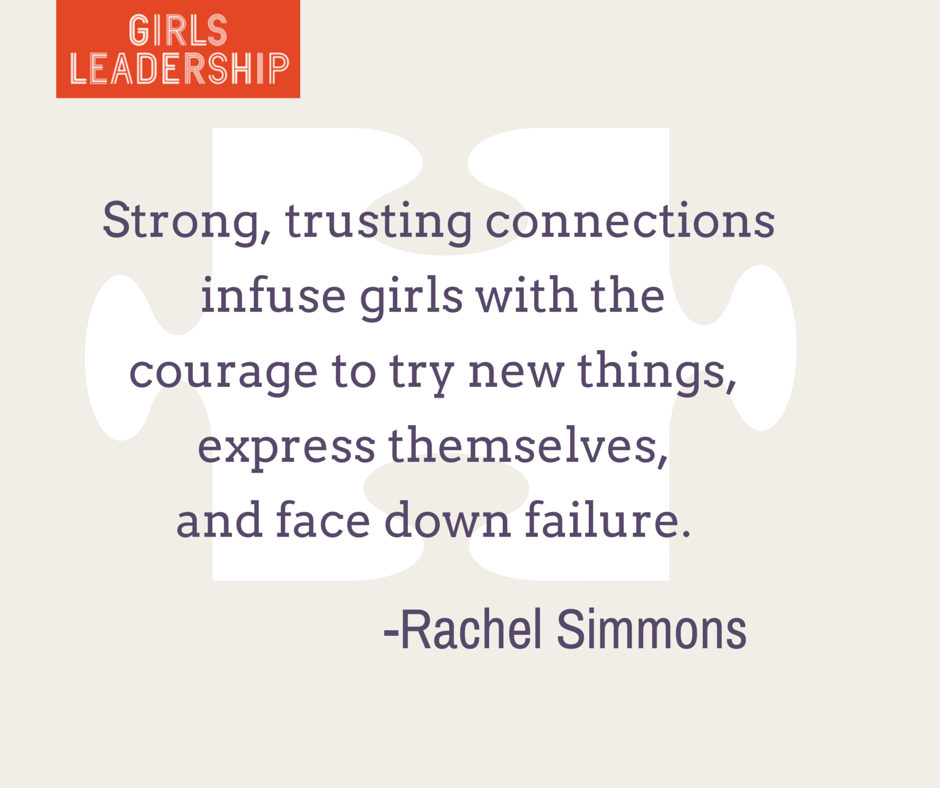 At Girls Leadership, we’re excited to convert our research into practice. Here are some ways you can follow up on this exciting finding:

Remember that girls want relationships with adults. It’s not just parents, either. Girls thrive when they are connected with educators, coaches, employers, and adult relatives. Let go, once and for all, of the stereotype that a teen only wants to be with her friends. It’s simply not true.

Don’t give up. If the girl in your life is sullen or monosyllabic, ask yourself if you’re connecting with her at the right time. In her new book on boys, Masterminds and Wingmen, Rosalind Wiseman tells parents to stop firing questions at kids the minute they get in the car or walk in the door. That’s often the first moment a girl gets to relax and stop thinking about whatever’s bugging her. In other words, it’s not when she wants to talk.

If you’ve ever left behind a place that was bugging you (work, cough cough) with a sigh of relief that you could finally relax, imagine someone waiting for you there and bugging you to talk. Wouldn’t you be sullen and monosyllabic, too?

If you suspect the way you talk with the girl in your life is a problem, invite her to a conversation where she can tell you how and when she is best able to talk. If you’re the parent, it’s okay to say that it’s your job to stay connected with her and check in. You’re looking to partner with her on that and respect her wishes as best you can.

Lead by example. You probably know girls face pressure to excel at everything. They’re supposed to be pretty, thin, smart, athletic, hardworking, and so on. What fewer people know is that girls think they have to do all of this effortlessly – that is, without ever asking for help. Many girls think seeking support means you’re weak or not smart. Others fear burdening or “annoying” someone with a request, which often means they don’t think they are worthy of asking for help in the first place.

Seek support in front of the girl in your life. When she sees you being vulnerable, she gets the permission and the script from you to do it herself. Girls will turn to others in their life to support them when they see the people they love and respect doing it, too.