This month, Girls Leadership book clubs will read books about girls who know who they are, and decide to be true to themselves. Whether that means having difficult conversations or resisting the pressure to change, these characters choose to be uniquely them, rather than change to fit someone else’s idea of who they should be. These three characters all use the written word to explore their identities, express themselves, and make sense of the world.

As you read, talk with your girls about the pressures that these characters might feel to conform to what others want, and how they reject that pressure. This conversation might lead to a general talk about general pressures to change and conform, and where those pressures come from – peers, media, even us grown-ups.

You could share this wonderful quote from Chimamanda Ngozi Adichie’s 2015 commencement address at Wellesley College:

“Please do not twist yourself into shapes to please. Don’t do it. If someone likes that version of you, that version of you that is false and holds back, then they actually just like that twisted shape, and not you. And the world is such a gloriously multifaceted, diverse place that there are people in the world who will like you, the real you, as you are.”

For older kids and grown-ups, I recommend this moving Ted Talk by Caroline McHugh, founder and CEO of IDOLOGY. Ms McHugh herself is an inspiring example of individuality, and the stories she tells about people living their largest, fullest versions of themselves might prompt you to ask yourself what it means to be you. 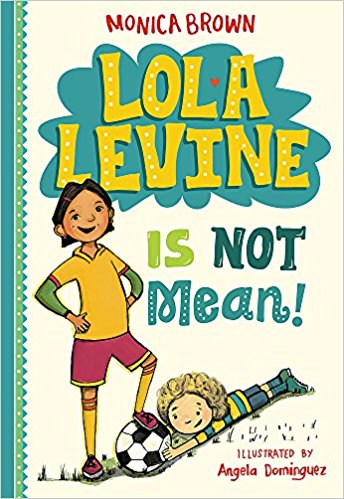 Lola Levine Is Not Mean by Monica Brown

About the book
2nd grader Lola Levine has strong opinions – about her favorite color (purple), her favorite animal (cats), and her favorite sport (soccer). Lola plays soccer at every opportunity, including with her classmates every recess. One day, Lola accidentally kicks another player while trying to stop a goal. Despite Lola’s sincere apologies, her classmates and school principal exclude her from playing sports. The other kids call her “Mean Lola Levine” for her competitive attitude on the field.

Lola insists that she’s not mean, only competitive. With the support of her family and her best friend Josh, she works her way back into the game, still wearing her favorite shirt, the one that says, “My goal is to stop yours.”

This is the first title in the Lola Levine series, in which there are currently six books. It received a starred review from Kirkus Reviews.
About the author
Monica Brown is a Professor at Northern Arizona University. She wrote the award-winning picture book Waiting for the Biblioburro, and the Marisol McDonald bilingual picture book series, as well as a series of bilingual picture book biographies. Lola Levine is based on her own experiences growing up as a part-Peruvian, part-Jewish, soccer-loving kid.

The First Rule of Punk by Celia C. Pérez

About the book
There are a million ways that Malú disappoints her mom. She’d rather wear ratty tee-shirts and jeans than dress up, chooses loud punk over Mexican ranchera music, and takes her food vegetarian (hold the cilantro). When her mom moves them to a new town, she follows her dad’s advice (first rule of punk: be yourself) with varying degrees of success. Through the ups – she forms a punk band – and the downs – her band gets banned from school – Malú expresses herself through handmade zines. The zines lend a fun graphic element to the book, and give us another window into Malu’s world.

This debut novel received many starred reviews, and has been featured on “Best of” lists including Kirkus Review’s Best Middle-Grade Books of 2017, School Library Journals’s Best of 2017, and the New York Public Library’s Best Books for Kids 2017.

About the author
Celia C. Pérez is a librarian, punk listener, and long-time zine maker living in Chicago. The First Rule of Punk is her first book for young readers. 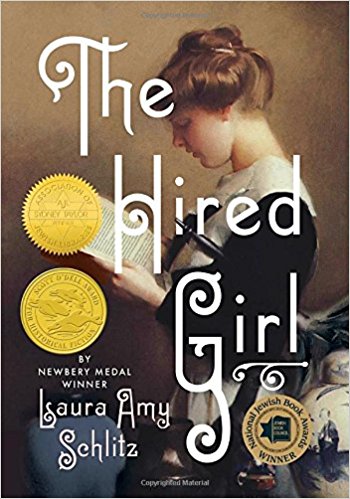 About the book
Joan Skraggs loves tales of sweeping romance. She knows she doesn’t belong on a Pennsylvania farm, doing chores from sun-up to sun-down, in a house surrounded by a father and brothers who don’t even try to understand her. When her father denies her the opportunity to attend school, the fourteen-year-old runs away to Baltimore, where she transforms herself into an eighteen-year-old named Janet Lovelace. There, she encounters the Rosenbachs, and becomes a hired girl in their wealthy household.

Set in 1911 and written in diary format, The Hired Girl is a funny and heartfelt story about a girl whose life unfolds in funny, heart-breaking, and altogether surprising ways. This book received the Scott O’Dell Award for Historical Fiction and the National Jewish Book Award.

About the author
Laura Amy Schlitz lives in Baltimore, where she works as a school librarian. She has written several novels for young readers, including Newbery Medal winner Good Masters! Sweet Ladies! Voices from a Medieval Village, Newbery Honor book Splendors and Glooms, and The Night Fairy, which was a 2016 Girls Leadership Girl & Grown-Up Book Club selection for 2nd and 3rd graders.