This month, we will read books about girls who saw something wrong in the world, and decided that they could use their voices to make a change.

A new year. Fresh slate, fresh calendar. Is it just me, or does the new year’s air even smell fresh?

Okay, just me then.

I don’t do resolutions, but I am big on reflecting. I like to take stock, ask myself how I’m doing and how I’m going to do better. Lately, I’ve been reflecting quite a bit on activism.

The truth is, I’m not doing so well on this front. Activism isn’t a comfortable role for me. But, everywhere I look, people around me – especially women – are using their voices and actions to make profound changes. Last summer, Glamour Magazine ran a feature article “The Women Who Will Save the World” (June/July 2018) and, as I read the profiles of these young women who are improving the world on many fronts, I noticed a pattern. Almost all of the women mention beginning activism work in their adolescence. Could it be that adolescence is a good time to start all kinds of habits? Not just flossing and brushing but also taking action to fix societal problems?

January’s books include a historical picture book about a girl who fought for workers’ rights; a historical novel about girls who visit their mother in Oakland in the 1960s and become part of the Black Panthers movement; and a memoir/handbook by a young and hugely successful young activist working right now to help girls in her community and around the world. These girls – and others like them – are my guides and role models. Like them, I want to make a difference with my determination, creativity, and passion. I hope you’re as inspired as I am. 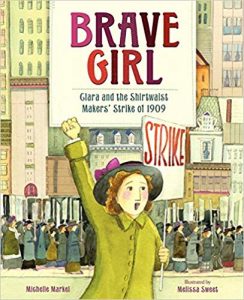 Brave Girl: Clara and the Shirtwaist Makers’ Strike of 1909 by Michelle Markel, illustrated by Melissa Sweet

About the book
Clara Lemlich was a young Jewish immigrant who moved to New York City with her family. The conditions in the garment factory where she worked were unfair, and Clara inspired the other girls and women in the factory to strike. Despite the difficult road she faced, Clara knew that if the workers banded together, they would have immense power to change labor practices for themselves and generations of workers who came after. Her story reminds me of the young girls and women on the political scene right now, organizing around issues like gun control and healthcare.

Published in 2013, Brave Girl earned several starred reviews and awards such as the Jane Addams Book Award for Younger Readers and the Flora Stieglitz Straus Award for Nonfiction from Bank Street College.

Michelle Markel has written many picture books, including the award-winning The Fantastic Jungles of Henri Rousseau. Most recently, she updated and published Eleanor Roosevelt’s book When You Grow Up to Vote. Markel lives in southern California. You can find more information about her work at michellemarkel.com. 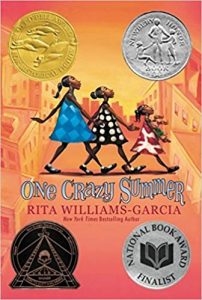 One Crazy Summer by Rita Williams-Garcia

The year is 1968. Delphine and her sisters travel to Oakland, California to visit the mother they hardly remember. The three girls hope to find beaches, movie stars, and the motherly attention they’d been missing. Instead, their mother Cecile shuts herself up writing poetry all day, and sends the girls to a day camp run by Black Panthers.

Rita William-Garcia was born in 1957 in Queens, NY, where she lives today. She sold her first story to Highlights magazine when she was fourteen years old. Now, she is a New York Times bestselling author. Her books for young readers have won many awards, including the Coretta Scott King Award, the Junior Library Guild, the Newbery Honor, and the Scott O’Dell Prize for Historical Fiction. Her most recent novel Clayton Bird Goes Underground received many starred reviews and is a National Book Award Finalist. 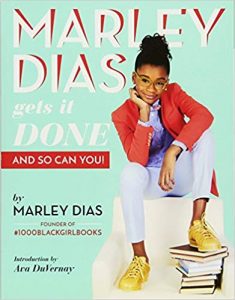 Marley Dias Gets It Done: And So Can You! by Marley Dias

This book tells the story of how Marley Dias took an idea – that she wanted to see more books with black female main characters in classroom libraries and reading lists – and made it into a movement. The book is also a window into Marley’s life, what it takes to be an activist, and how other girls can affect change in their own communities.

Marley Dias gained national attention when, at the age of eleven, she was fed up with the all-white characters in the books she was assigned to read at school. She founded the #1000blackgirlbooks campaign with the goal of collecting and donating 1,000 books featuring black female main characters. She collected over a thousand, and donated them to a school in rural Jamaica. But the books kept pouring in. To date, she’s collected more than 11,000 books, been featured on Forbes “30 Under 30” list , published a book, and started “Marley Mag,” a digital ‘zine on the Elle Magazine website.