It’s hard to believe it, but this is our last month of Girl & Grown-Up Book Club for this year. We hope you have enjoyed reading together, that you learned from the variety of characters we met along the way, and, most importantly, that you connected with each other through sharing and laughter. We’ll be back with more books next school year!

This month, we’ll read about characters who are willing to take great risks to achieve great things. The word ambition is not yet used to describe women and girls as often as it should be, but the girls in these stories set difficult goals and work hard to reach them. They do so despite setbacks, disappointments, and others telling them their dreams are impossible.

Sometimes, the first – and scariest – step we take toward our dreams is simply saying what it is that we want. It’s one thing to harbor secret dreams in our heads, it’s quite another to admit our dreams out loud where other people might hear them. If we announce, for example, our intention to be a pilot, as Ida Mae does in Flygirl, someone might laugh at us, or tell us why it won’t happen. It feels much safer to keep our dreams to ourselves. While secret dreams might be safe, they also rarely become real.

While you read this month’s books, you might take the opportunity to talk about your dreams, and ask the girl in your life about hers. Encourage dreams both big and small. One question you could ask is,

“What do you think the first step toward your dream is?”

Every wonderful thing that anyone has ever accomplished started off as a dream.

You could also share this wonderful video of a young spoken-word poet from New York City who began performing her poetry in Manhattan when she was fourteen years old. In this speech, she talks about discovering her love of spoken-word poetry, and deciding to work toward that goal. She didn’t keep her dream a secret, but instead put it out into the world so it could become real.

All around us, there are examples of people who took great risks so that their dreams would come to fruition. Notice them; point them out to the girls in your life. They are reminders of what’s possible.

We’ll be back next year with more recommendations and discussion guides for grades 2-8! Until then, stay in touch and keep reading. For book ideas, try checking out our Book Club archives, our Even More Books archives, browse on A Mighty Girl’s website, or check out some of the notable books from the American Library Association.

Please keep an eye on your Inbox for our end-of-year Book Club survey. We would appreciate it if you could take a few minutes to fill it out. It really helps us create the best program we can!

Thank you, and happy reading. 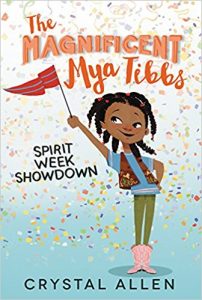 About the book
Mya Tibbs is determined that she and her best friend Naomi will win the Spirit Week contest, receive VIP tickets to the Fall Festival, and live happily ever after. When Mya gets paired with Mean Connie Tate, instead, her plans seem to be ruined. Not only that, but Naomi is furious with her and spreading ugly rumors about her all over the school.

As Spirit Week continues, her best friend is acting mean and her enemy is acting like a friend! Mya is confused and desperate to figure out this conundrum so she can fix her friendships and get to the Festival! With her unsinkable spirit, her lucky cowgirl boots, and a supportive family at her side, she knows she can accomplish anything.

This book was published in 2016, and received a starred review from Kirkus Reviews.

About the author
Crystal Allen published her first book How Lamar’s Bad Prank Won a Bubba-Sized Trophy in 2011, which received a starred review from Publisher’s Weekly. She’s also written a novel called The Laura Line and two books about Mya Tibbs. 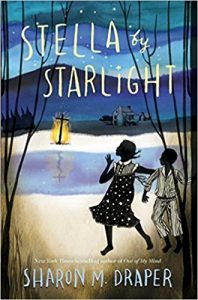 About the book
Twelve-year-old Stella and her family live in a segregated North Carolina town. One night, Stella and her brother Jojo happen upon a Ku Klux Klan gathering in the middle of the night. This discovery brings racial tensions in the town to a boiling point. Several of the black men in the town decide to vote in the upcoming election, even though members of the white community threaten to retaliate with violence. When they do, Stella, her family, and friends stick together, coming together over food, stories, and laughter. And, every night, Stella takes her notebook to the front porch and writes down her stories. At first, writing is hard and she worries she’ll never amount to anything. But, as she finds her voice, her writing helps her make sense of the world that she hopes, someday, to change.

This story is set in the historical period of the Great Depression, and poignantly shows how people have always had to stand up for justice, and always will.

Stella by Starlight was inspired by the true story of Ms Draper’s grandmother. It was published in 2015, and has earned many distinctions, including the Charlotte Huck Award from the National Council of Teachers of English. It was on Kirkus’ Best Middle-Grade Books of 2015 list and the New York Times included it on its list Notable Children’s Books of 2015.

About the author
Sharon M. Draper is a teacher and a writer who has received many awards and recognitions for her work in both areas, including the National Teacher of the Year award and the ALA’s Margaret A. Edwards Award for lifetime literary achievement. She addresses audiences all over the world, and represented the United States at the Book Festival in Moscow.

Ms Draper has written many, many award-winning books for children of all ages, as well as titles for teachers. Her book Out of My Mind has been on the New York Times Bestsellers list for over two years (and counting!). For more of Ms Draper’s wonderful stories, visit sharondraper.com. 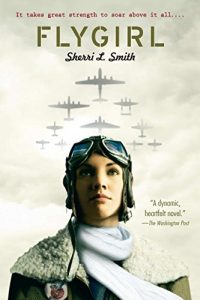 About the book
All Ida Mae thinks about is flying, just like her daddy did. But because she is black, and a woman, she knows her dream is impossible. Then, when the United States joins World War II, they create the WASP – the Women’s Airforce Service Pilots. Ida Mae wants to join so badly she’d do almost anything, even use her light skin to pass as white. Lying about who she is creates a strain with her friends and family and a heaviness in Ida Mae’s heart. She has to find a way to be true to who she is while doing the one thing she loves above all else.

Flygirl was published in 2009. It earned a starred review from Booklist, was an ALA Best Book for Young Adults, and was included on the Washington Post’s Best Kids’ Books of the Year.

About the author
Sherri L. Smith was born in Chicago, IL. She has written several young adult novels. Her first book, Lucy the Giant, was selected as one of the American Library Association’s Best Books for Young People and one of Bank Street College’s Best Children’s Books of the Year. She now lives in Los Angeles. For more information, visit sherrilsmith.com.