If there is one thing you can be sure girls around the country are discussing, it’s Halloween costumes.

This year, my 11-year-old, and at least half of her friends, are planning to dress as YouTube sensation Miranda Sings (rated PG). If you don’t know her, she’s a satirical character played by comedian Colleen Ballinger Evans whose jokey tutorial videos get millions of views and leave girls weeping with laughter. If your daughter walks around the house saying “Haters Back Off!” in a nasally voice or does silly versions of the “Whip and Nae Nae” dance, rest assured that Miranda has entered your house.

I’m so on board with this costume. Girls like her because she’s funny, and they understand how smart Colleen is behind the yukks. She also dresses the opposite of sexy – with bright red lipstick that extends far past her lips, high-waisted pants and tops that include flannels and cat sweaters. Perfect Halloween attire, even if they have to explain over and over who they are. 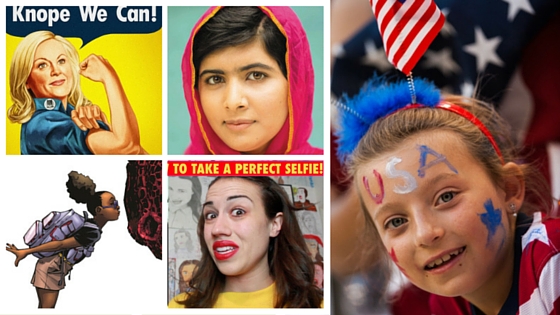 Once again, the streets this Halloween will be teeming with girls age five and up dressed as sexy kittens, sexy pop stars, sexy police woman, sexy cowgirls, and…anything else you can “sexify.” I don’t blame girls one bit. They’re getting hammered with the media message that “hot” is the best thing a girl can be. Why not spend the night of dress-up giving it a try? The costume industry sure has made it easy. My answer is that while one could argue it’s fine for older teen girls to experiment with “sexy” for a night; we should encourage young girls to just be kids and not eye candy.

How do we do that? First, don’t buy costumes with plunging necklines, heels, or super-short skirts. Say nuh-uh. But then talk to them about cool options that are fun, feel good, and maybe even inspirational for girls. Below are 10 ideas for girls straight from the middle-schoolers in our MEDIAGIRLS program:

The U.S. women’s national soccer team, who thrilled us this year when they won the World Cup and showed everyone how talented, determined and tough female athletes can be. They even created a team campaign called #SheBelieves to inspire girls to go after their dreams. You can go solo and dress as one of your favorite teammates, or get your friends to go together as the team!

“Moon Girl” is Marvel’s brand new comic-book character, a black female superhero named “Lunella Lafayette.” She discovers that she has an inhuman gene that makes her super smart and allows her to communicate with her 30-foot Tyrannosaurus Rex sidekick. For a Halloween outfit, wear a giant backpack (easy to store candy), put your hair up in a high ponytail, and wear white knee socks and big round glasses.

Malala Yousafzai, the youngest person to receive the Nobel Peace Prize, is a huge role model for girls around the globe. In spite of the Taliban issuing a death threat against her for going to school, Malala continues to get educated and fights for all girls to have the opportunity. For a costume, you could wear a beautiful and colorful headscarf, part your black hair (or wig) to the side under the scarf, and design a T-shirt or sign that says “Education for all girls!”

Leslie Knope from the funny TV show “Parks and Recreation” runs a government office in a small town in Indiana, and does anything (moral) she can to achieve her dreams. She never lets anything get her down, and always looks on the bright side of life. Her office is decorated with framed photos of women politicians, and it would be easy to dress like her in a blond wig, pink lipstick, “Say Yes to Knope” sign or pin, and donned in bumper stickers.

Other fun and feel-great costume ideas from girls: